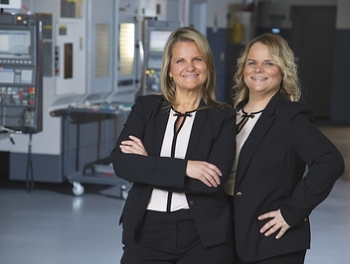 The Bartkowicz sisters, Lillian and Dorothy, bear a rare and distinguished mantle among Connecticut businesses: They are female owner-operators of a Newington manufacturing company in a state that built its economy and reputation around technical innovation and production.

"He put us to work, all of us,'' said Dorothy Bartkowicz Weber.

Women who own, lead or work in the C-Suite of Connecticut companies that rely on workers' science, technology, engineering and math (STEM) skills to design, make and sell capital goods and equipment and technology remain a rare breed.

But lately, signs are emerging that Connecticut employers and educators are making inroads enabling more females to crack the gender barrier in manufacturing and engineering.

Along with women emerging as manufacturing-business owners, large manufacturing employers are seeding some of their most visible management and executive slots with females.

In a related move, it launched "Women Advocating Leadership At Kaman" (WALK), an initiative not only to hire and retain more females, but also, it says, to expose more women to manufacturing and leadership opportunities inside and outside Kaman.

Four months earlier, General Electric, now Boston based but still with a sizable Connecticut presence, said it wants 20,000 women to fill STEM roles by 2020, with gender parity in all its technical entry-level programs.

Fewer women in engineering and manufacturing fields has been a reality in the U.S. and Connecticut for generations. The stereotype of manufacturing, in particular, as hot, dirty, smelly and unsafe has stifled men and women from considering careers there. That's on top of few manufacturing-job opportunities for women, who some still see as too fragile for the work.

Rebecca Karabin-Ahern, a second-generation co-owner and executive of her family's Acme Monaco Corp. in New Britain, admits she probably would not have chosen a manufacturing career were it not for her parents involvement — and support.

"When I was growing up, and even in more recent times, manufacturing just wasn't something a young female considered,'' Karabin-Ahern said. "I believe that is changing."

According to a 2015 study by accounting-consulting giant Deloitte, the U.S. manufacturing sector faces a labor shortfall estimated at 2 million workers and "women are manufacturing's largest pool of untapped talent."

While women at the time represented 47 percent of the total U.S. labor force, they made up only 27 percent of the manufacturing workforce, the Deloitte study said. Manufacturers reported that six in 10 unfilled factory jobs were the result of a skilled production workforce.

In Connecticut alone, manufacturers, including Pratt & Whitney and Electric Boat in New London-Groton, are looking to fill more than 13,000 jobs. The state Department of Labor last week declared that manufacturing's strong performance lifted Connecticut's overall job growth for 2017. Manufacturing, the state said, citing state labor data, added 6,300 jobs last year, only the third annual gain for the sector in the past two decades.

"With women representing less than a third of the manufacturing workforce,'' Deloitte said in the study, "it's clear manufacturers are missing out on a critical talent pool, which could aid remarkably in closing the skills gap."

Despite stereotypes, signs are mounting that more females see themselves designing and making machine parts and systems.

UConn's School of Engineering, through a myriad of STEM recruiting-mentoring programs and outreach targeted at elementary, junior-high and high-school females, especially minorities, has ratched up its female enrollment.

Kevin McLaughlin is involved in similar efforts, directing the engineering school's Diversity & Outreach Center. McLaughlin lists nearly a half dozen school- and industry-sponsored networking and mentorship programs with women who work in engineering and manufacturing in which UConn is heavily involved to widen its promotional pipeline to potential female engineers.

"If they don't see role models,'' he said, "not too many of them are going to continue. They have to see someone who looks like them."

The Bartkowicz sisters point to twin role models — their father and mother. Richard and Sophie Bartkowicz immigrated from Poland to the U.S. in 1970. They settled in New Britain, where Richard found work as a machine operator. Sophie worked nights at toolmaker Stanley Works.

In 1978, the parents, while holding down full-time jobs at other manufacturers, launched Richards Machine, renting space in the city and acquiring CNC machines to do fine milling work for early customers including former U.S. Surgical in North Haven, now Covidien. Richard Bartkowicz exposed both daughters to manufacturing early.

"He put us on the machines when we were a little older,'' said Dorothy Bartkowicz Weber.

When Richard Bartkowicz died of a heart attack in 2002 at age 50, Lillian Bartkowicz, then a student at Central Connecticut State University, accelerated plans to join the family business. Dorothy, then an occupational therapist in Hamden, came aboard in 2003.

"When I went on the road to make sales, I wasn't taken seriously,'' she said. " … I think people were a little skeptical of us running the business."

But they won over skeptics, she said, with high-quality products, customer service and delivery. In recent years, Richards has invested more than $1 million, including with manufacturers' assistance from the state, in new equipment and its purchase of an 18,000-square-foot Newington building, to relocate from Berlin.

Bartkowicz Weber says she also witnessed over time improvements in attitudes toward women in manufacturing.

"From 15 years ago to today, I see changes,'' Bartkowicz Weber said.

She said she encounters more females in manufacturing sales and engineering today as Richards Machine and other employers seek to diversify their talent ranks, largely due to an overall shortage of manufacturing hands.

Richards is grooming apprentices to help fill that gap.

Bartkowicz Weber has no regrets about her career shift into manufacturing. She even puts her occupational therapy skills to work occasionally.

"I'm always making sure employees are trained with proper lifting techniques and maintaining a safe, clean work environment,'' she said.