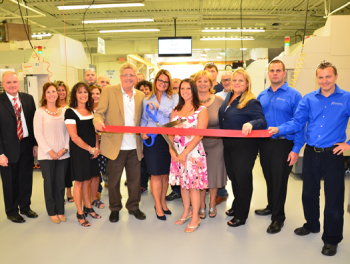 The Richards Machine Tool company, a quality manufacturer of high precision machined components used in the aerospace, automotive and medical industries, celebrated today the opening of its new location at 187 Stamm Road in Newington.

Their open house was highlighted by a ribbon-cutting ceremony hosted by Newington's Chamber of Commerce with welcoming remarks by Mayor Steve Woods.

Founded more than thirty years ago, Richards is a Women Owned Minority Business Enterprise, headed by President Lillian Bartkowicz. "Maintaining a commitment to innovation and leading edge machining technology has led Richards to sustained business growth" according to Ms. Bartkowicz, "which meant we needed a larger and more modern space to accommodate our new employees and equipment".

Richards acquired the land and 14,000 square foot building for $550,000 late last year and completed extensive renovations this summer. "The process of moving manufacturing was done cell by cell," Vice President of Operations Steve Weber said, "It's quite complicated to relocate and recalibrate while minimizing impacts on production and delivery times. But now that we're fully up and running, our capabilities are more impressive than ever."

Mayor Woods congratulated the company on selecting Newington for its new location, saying "We welcome you to the growing number of precision manufacturing enterprises that call Newington home—and we look forward to your finding even more success for your company in Newington". Mayor Woods also noted that "the Aerospace Manufacturing Academy currently under construction at John Wallace Middle School, coupled with the STEM program at Newington High School, will help Richards find the skilled workers they will be looking to employ in the future".

Terri Gogluicci, Newington Chamber President, also welcomed Richards. "We're certain you're going to like being in Newington", she said, "And I have no doubt you’ll find being an active member of the Chamber will provide benefits for your company and your employees."

Richards currently has twelve employees and moved from Berlin.