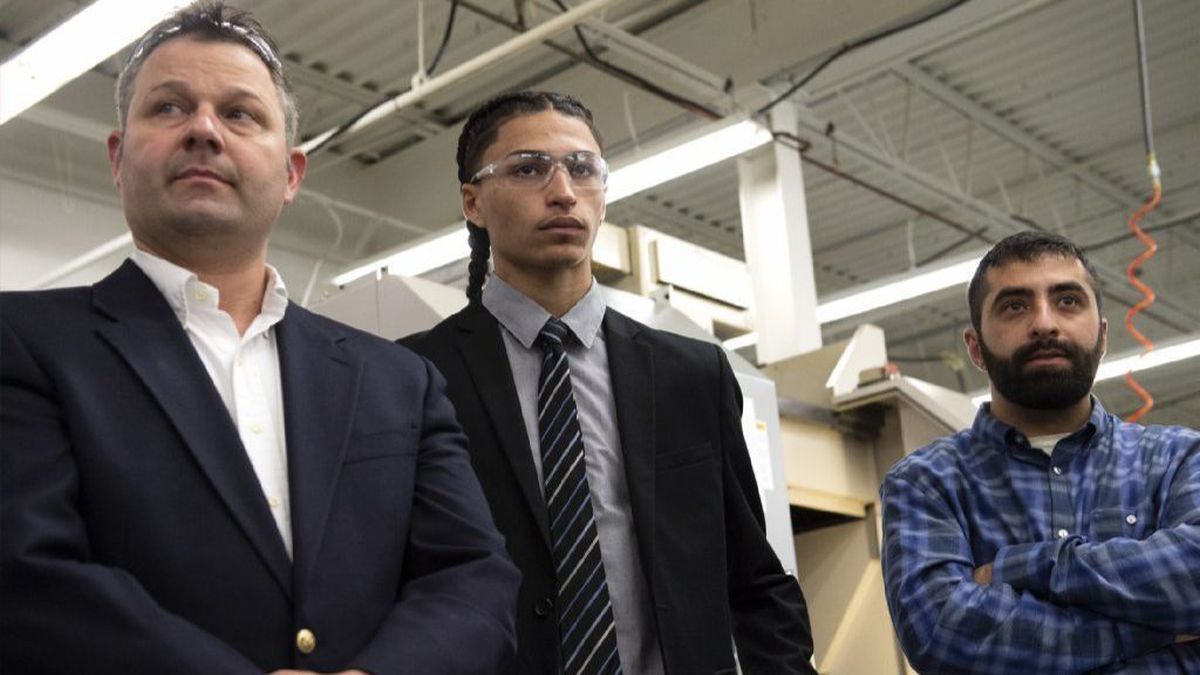 In Search Of Workers, Connecticut Manufacturers Reach Into High Schools

It's not an easy task as educators and manufacturers battle stereotypes of old, dirty factories.

"The struggle has been getting the kids to see it," said Mark Ruede, assistant principal at Manchester High School. "We definitely have some perception work to do in town."

Manchester High School students have visited Pratt & Whitney in Middletown where the United Technologies Corp. subsidiary manufactures jet engines, he said. What began as a trip to teach engineering became a lesson in manufacturing, Ruede said.

On a tour last week of Richards Machine Tool Co. Inc., a Newington aerospace and transit equipment manufacturer, a half dozen New Britain High School students listened as Tom Grzymala, who works in quality control, emphasized how factories have changed.

"It's very different from the movies you've seen," he said. "It's clean. It's computer-based."

Stephen Weber, vice president of operations at Richards Machine Tool, said that with 17 employees, the company has room to grow and is looking to hire. Finding workers on Craigslist or in the local newspaper is "hit or miss," he said.

What works, Weber said, is "going into the high schools."

In an otherwise lackluster economy, manufacturing in Connecticut is a bright spot. Manufacturing added 4,500 jobs in the last year, accounting for nearly 163,000 jobs in the state. Spurring demand for workers is a booming business in commercial and military aerospace and submarine manufacturing.

Behind that growth are airline manufacturers capitalizing on a growing middle class taking to the skies in populous nations such as China and India, significant increases in U.S. defense spending and a generational shift in the workforce as Baby Boomers retire.

Educators and others who promote Connecticut's manufacturing industry speak with a sense of urgency about the need for workers.

"We need to get to these kids before they decide what to do," said Frank Gulluni, director of the manufacturing technology center at Asnuntuck Community College in Enfield. "Most of them don't consider manufacturing. Their parents don't."

Joseph Figueroa, 17, is wrapping up his junior year at New Britain High School and already has a finance and accounting job at Richards Machine Tool. With his experience paying bills, organizing employee timesheets and setting up online spreadsheets, he's considering a college education in accounting.

"You can go wherever you want from there," Figueroa said.

Working on the factory floor is a possibility. "I'm thinking about it," he said.

More than 13,600 manufacturing workers — machinists, welders, tool and die makers and others — are needed in the state, according to a survey by the Connecticut Business & Industry Association. Schools in Connecticut are turning out far fewer qualified workers each year.

The state operates seven advanced manufacturing education programs, with an eighth expected to start in August at Tunxis Community College in Farmington.

In addition, community colleges and vocational schools teach classes that can be applied to manufacturing. Robotics, 3D printing and other high-tech work are promoted to capture the imaginations of young people.

Every fall, about 15 high schools bring in about 250 senior and junior high school students to a "manufacture your future" event to participate in workshops and meet business representatives, said Stephen LaPointe, manufacturing technology center director at Quinebaug Valley Community College.

"We're just touching the surface," he said. "Enrollment isn't 100 percent. They should be beating down the doors."

In addition to the strong odds of finding work, manufacturing jobs can pay as much as $18 an hour early in a career, following a year or two of internships, said Lori Theriault, founder of Work!T , a training business that works with students. Parents will eventually see manufacturing for its "salary potential," she said.

About 2,100 students in high schools in 41 districts are in manufacturing classes, according to the state Department of Education.

High schools, such as in Manchester, that don't have manufacturing classes instead offer computer-assisted design and drafting, tools and other materials, Ruede said.

High schools may offer basic shop classes that teach wood cutting and the use of tape measures, protractors and "some hands-on stuff," LaPointe said.

Not only are manufacturers working with high schools, but Gulluni said stronger ties between colleges and high schools to foster interest in manufacturing are "happening significantly."

"We're now trying to get into middle schools and elementary schools," he said.